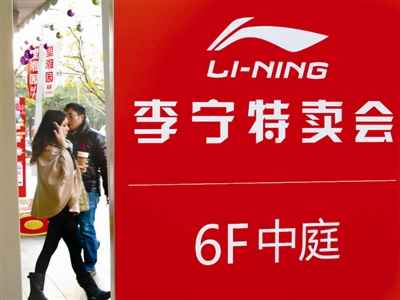 At the opening ceremony of the 2008 Beijing Olympics, Li Ning, as the last torchbearer, personally ignited the main torch on the Bird's Nest. The blazing Olympic flame also brought Li Ning's performance to a new height and it also ignited. People are sprinting global hopes for Chinese sports brands.

However, more than three years have passed, Li Ning's performance has not only not significantly improved, but the gradual decline appears. Earlier this year, Li Ning's sales were not only exceeded by Anta, another domestic company, but a group of senior executives of the company resigned. The company had to lay off staff in order to save costs.

The glory of the Beijing Olympic Torch is still vivid, but for Li Ning, it is still experiencing all kinds of difficulties. Just after the Spring Festival, Li Ning announced layoffs to reduce personnel costs.

According to Li Ning, in order to improve operational efficiency and improve net profit margins, some non-core business units, such as sub-brand back-office intelligence departments, will adopt ways to optimize the organizational structure, reduce personnel costs, and put resources saved into the group. The core business. In addition to streamlining staff, integrating resources and motivating outstanding employees is also an important means for the company to improve operational efficiency. In addition, Li Ning also emphasized that its strategic direction of development will not change due to the restructuring of the organization.

The adjustment of the general staff of the company is inevitable, and the senior management of Li Ning is also in turmoil. In just two months, Li Ningâ€™s general manager of human resources, information technology, strategic development, and international markets have left. It is reported that the company CMO Chen Jiyi has also left. Chen is the third chief marketing officer of Li Ning. Since last year's personnel fluctuations, Li Ningâ€™s senior management has left at least five people.

The personnel adjustment is only one of Li Ning's big actions. The company's other actions are also quite interesting. Before the layoffs were announced, it also announced that it had obtained 750 million yuan in strategic investment. For this series of actions, Li Ning's response is: take the initiative to change the strategy steps.

The change had to be carried out as soon as possible. According to the performance forecast issued by Li Ning, the Groupâ€™s revenue in 2011 is expected to decline by 6% to 7% from 2010.

In addition to profit warnings, Li Ning also had to face both internal and external environmental pressures. On the one hand, there is a large inventory of domestic sports brands. According to some distributors, after the 2012 new quarterly ordering meeting for a certain brand, inventory clearance will become the focus of work in 2012, and the ratio of channel inventory of the brand will continue to rise in the fourth quarter of 2011.

On the other hand, the pace of international brands sinking and hitting the price of the people has not been relaxed. In the stores of Nike and Adidas, the price of 300~400 yuan has been very common, and the price in the online shop is even cheaper. They gradually occupy the share of Li Ning and other domestic sports brands in the low-end market, and also Li Ning, Anta and other domestic brands are forced to make changes.

Change is not in advance

â€œLi Ning should have foreseen the bad market environment in 2012.â€ Ma Gang, an expert in shoe and clothing industry, pointed out that Li Ningâ€™s measures are more to deal with the difficulties of 2012.

In fact, in order to achieve further development, as early as 2010, Li Ning Company began to brewing and implement changes, the magnitude of the action is staggering.

In order to cooperate with the expansion of the global market, Li Ning began to replace the new LOGO in the third quarter of 2010. The products involved in Li Ning sports shoes, apparel, accessories and ball and other product lines, while the global Li Ning store and the company VI will use this New sign.

The purpose of this action of Li Ning Company is to change its image in the minds of consumers and gradually move closer to such high-end sports brands as Nike and Adidas to get rid of the low-end image. After all, in 2009, Li Ning ranked second in China's sportswear industry with sales revenue of nearly RMB 8.3 billion, surpassing Adidas for the first time, followed by a slight disadvantage to Nike.

With the growth of market share and the catch-up of Anta and other Chinese sports brands, Li Ning has been more prepared for danger and implemented reforms at its peak. However, some people in the industry still believe that Li Ningâ€™s reliance on the traditional mode of extensively increasing â€œstorefrontsâ€ is difficult to change rapidly. When there are abundant funds and few competitors, Li Ning can still maintain for a period of time, once it encounters a bad economic situation, With the increase in competitors, this road can no longer be maintained.

Li Ning's situation is just a typical example of a Chinese sporting goods company. In China's sporting goods industry, Li Ning is not the only company in difficulty, and a number of domestic sports brands such as Peak, Xtep, 361 Degrees and Anta are also facing similar problems.

The industry believes that the expansion of domestic sports brands can be summed up, nothing less than the use of the Beijing Olympics Dongfeng and an upsurge of listing in Hong Kong, adequate capital for enterprises is even more powerful. However, behind the frenzied expansion, various issues such as the deceleration of scale growth, high market concentration, and high inventory are exposed. Li Guangdou, a brand strategist, said: â€œThe current domestic brands face the predicament of 'strong enemies before, followed by pursuers.' In the face of severe product homogeneity, local brands did not grow well after the Beijing Olympics. â€

The pressure of cost has also made these domestic sports brands have to consider price increases: on the one hand, it is an inevitable cost factor, and on the other, the simple extension of the companyâ€™s original expansion channels was gradually replaced by â€œopening shop + price increaseâ€. The profit-driven model will also be transformed from the original "price increase" to "price increase".

According to the analysis in the industry, sports brand companies not only face pressure from homogenization competition in the same industry, but are also squeezed by the market of the leisure industry. â€œLi-Ning announced that it will begin layoffs. It is only the first domino. The prelude to layoffs for other sports brands will be opened.â€ said Shao Ligang, a domestic clothing consultant.

The industry generally believes that the crazy expansion of the local sports brand is currently facing a new cycle. The high premium foreign brands Nike and Adidas firmly control the high-end market of domestic sports brands. How local brands deal with the tendency of sports brands to â€œconsumption in foreign countriesâ€ is a proposition that companies should consider in the white-hot competition.

Regarding the companyâ€™s recent personnel restructuring, Zhang Zhiyong, chief executive of the Li Ning Group, believes that in the current transformation of the Chinese sportswear industry and the Groupâ€™s initiative to change, the Group continues to organize changes in line with the Groupâ€™s change and strategy implementation goals. And personnel adjustment is a necessary step.

Compared to Li Ningâ€™s rapid change strategy and personnel adjustments, Anta, Peak, Guiren Bird and many other sporting goods companies will also encounter the problems encountered by Li Ning. For them, according to the needs of the market, Preparing to prepare later than to pay a smaller price. â€œLi Ning is the leading brand in the industry, and in some respects it is the industryâ€™s trial-and-error and pathfinder. This may allow latecomers to avoid some similar mistakes.â€ Ma Gang, an expert in shoe and clothing industry, said in an interview with the media.

Some people in the industry believe that there are many domestic sporting goods companies and their homogeneity is serious. In order to survive and develop, everyone must find their own reasonable position while avoiding the advantages of others, so as to avoid failure.

We are manufacturer of Glass Blown Ornament in China, if you want to buy Hanging Glass Xmas Ball,Hanging Glass Art,Hanging Decoration Ornament please contact us.